The eight letters we are learning today in Lesson 6 (actually six letters because you’ve already learned two in prior lessons) have a common theme – dots and rhyming.

While we learned the letter BET has a bellybutton, BET has a twin called VET that doesn’t have a dot in the middle of it. The bellybutton vanished and the letter is now vacant. While the rest of the letter looks exactly the same, no dot means VET not Bellybutton BET. VET makes a “v” sound like violin.

Way back in Lesson 1, we told you to pay attention to the letter BET’s shape because it will closely resemble another letter. Well, the time has come for the big reveal.

The letter KAF looks like a backwards uppercase “C.” KAF has a dot in the middle of the letter just like BET, but we remember KAF’s dot as a cough drop caught in KAF’s throat. KAF makes a “k” sound like kangaroo. KAF also has a letter twin, CHAF, which is the same backwards uppercase “C” shape as KAF but without the dot. Unfortunately, both of these letters aren’t feeling well, and while KAF has a cough drop, CHAF is coughing up a lot of phlegm and mucus. In order for CHAF to clear the phlegm from its throat, it makes a “ch” sound to do so. This “ch” sound is the same exact sound as the letter Chanukkah CHET that we learned in Lesson 5.

PAY and FAY have, by far, my favorite ways to remember these letters. First off, PAY and FAY look like a backwards, upside down, uppercase “G.” I’m fully aware that is one of those “my brother’s wife’s second cousin’s daughter” descriptions and I apologize for that. Of course, PAY has a dot and its twin FAY does not. So how do we remember the two letters? PAY has a pimple — the dot — and FAY had a facial so FAY’s skin is super clean and clear — no dot. PAY makes a “p” sound like popcorn and FAY makes a “f” sound like flower.

Another really fun way to remember PAY is to think of it as a game of Pacman. I encourage you draw your own Pacman game board like the one I made here: 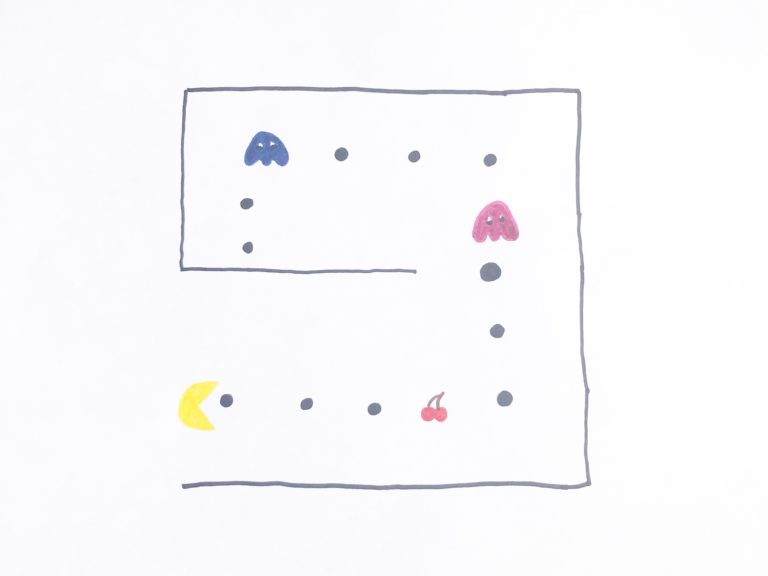 The final twin letters are SHIN and SIN. There is a difference between these two letters and the other pairs of twin letters we learned in this lesson, because both SHIN AND SIN have dots. Now, we already talked about the letter SHIN in Lesson 1 when we learned the letters to make the word Shabbat. SHIN has the dot above the far-right arm. SIN, on the other hand, has a dot on the far-left arm. We call it sunset SIN because after sunset, the sun has left the sky and the dot is on the left. SIN makes a “s” sound like snake. Even I default to SHIN most of the time I’m reading Hebrew, so you have to be on the lookout if the dot is above the far left arm which makes the sound “s” instead of “sh.”
0
HEBREW LESSONS TO GO!

Are you ready to continue?